On this day, people all over the world will rise for Climate, Jobs, and Justice.

In New Orleans because there is going to be an effort to rise for Cancer alley in St. James,

what better place to RALLY, and bus ride than Gordon Plaza?!!!

Healing Circle for Community Support of Residents of Gordon Plaza

This will be a Healing Circle in Congo Square to do at least three things:

honor the lives lost due to toxicity at Gordon Plaza,

support the residents in their demand for a fair and just relocation, and

learn about the organizing efforts to fight for this issue to be resolved. 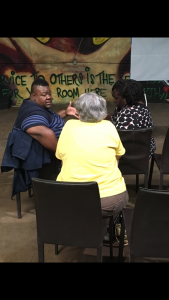 The New Orleans Peoples’ Assembly welcome all folks who are dedicated to the uplifting the voices of the working class women of New Orleans. Come break bread and get fed physically, mentally and emotionally, as we are offering discussions on community building; strategies for self-care, information on our collective work and more. Join us!!!

This month’s focus: “Community Sing”. The power of revolutionary music in the movement for social change. Engage & learn more about how to get involved.

Last month, we held our September’s open house/rent party and cookout! Join Peoples Assembly for our monthly BBQ fundraiser this Sunday, 10/22. Hang out with good people, eat good food, and listen to good music, all for a good cause.

Join us for our monthly meeting was postponed due to the threat of hurricane last week. It has been rescheduled for Oct 21st at the Crescent City Boxing Gym 3101 Erato St from 11-2pm. We will be talking about our Protect the Children rally & march and the lawsuit against the New Orleans S&WB. Next week’s organizer meeting will focus on what we need done to get ready for the meeting and other logistics.

Rodneka Shelbia is a freedom fighter, singer, songwriter, and member of the Peoples’ Assembly. She has been wrongfully accused of assaulting an NOPD officer for trying to stop an him from attacking a woman and her baby. If you care about ending police brutality, if you care about justice, if you believe that Black Lives Matter, please come to Rodneka’s next court hearing on Friday, 10/20 at 8:30 am Criminal District Court, to support her and stand in solidarity. Please wear white if you are able.

You have heard about the Peoples Assembly!

Hear about the current initiatives, and how to get involved. 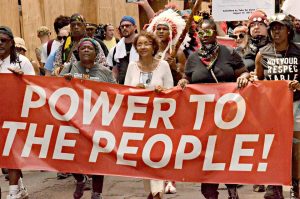 If you or someone you know has experienced loss of personal property or wages, due to local flooding, attend this meeting. If you know of someone who has been affected, please encourage them to attend.

A Message to New Orleanians from the Peoples Assembly

Hold Mayor Landrieu and the Sewerage and Waterboard Board of Directors Responsible for recent floods and Our Anxiety During the 2017 Hurricane season.

Mayor Mitch Landrieu and the Board of Directors of the Sewerage and Water Board must be held responsible for the present mismanagement and neglect of our drainage system. We residents depend on the city government to keep us dry during rainstorms. They have failed.

Every day we find out about another failure by the Landrieu administration. Their negligence has cost many of our fellow residents tremendous losses. People lost their cars. Many people lost possessions as water rushed into their homes. Small business lost revenue. Workers lost days of pay.

We have heard nothing but excuses from the Landrieu government. Top managers at the SWB have been fired. But the reality is that Mayor Landrieu was asleep at the wheel. The buck stops with him. We are witnessing and paying the price for Landrieu’s negligence.
Things won’t get better unless we make them better!

Fellow residents: It does no good to complain among ourselves; things will remain the same if we do not act in our own best interest. We must organize mass meetings leading to mass mobilizations to force the city to fulfill its duty to protect us from the rains and hurricanes.

We must realize that one of the fundamental duties of city government is to provide drainage. We know now that the SWB and Department of Public Works (DPW) utterly failed to carry out this basic duty. Thousands of drains have not been cleaned out for decades. Essential equipment was left unprepared. Pumps were not repaired and many of them were not manned during rain storms.

We must demand the return of the SWB to city government control and have a oversight board that includes SWB workers and ordinary working class citizens.

Join us at a mass meeting at Christian Unity Baptist Church on Tuesday, September 5, 2017 at 6pm.

The Peoples’ Assembly is filing a class action lawsuit against the city of New Orleans for damages suffered as a result of recent flooding.  If you would like to be a plaintiff in this lawsuit and receive updates, please fill out the form below.